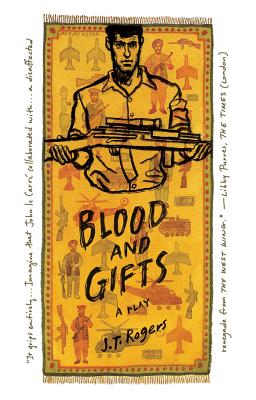 Blood and Gifts: A Play

"My God, Russian soldiers being shot with Chinese bullets. Sometimes the world is so beautiful."

It's 1981. As the Soviet army burns its way through Afghanistan, CIA operative Jim Warnock is sent to try to halt its bloody progress, beginning a secret spy war behind the official hostilities. Jim and his counterparts in the KGB and the British and Pakistani secret services wrestle with ever-shifting personal and political loyalties. With the outcome of the entire Cold War at stake, Jim and a larger-than-life Afghan warlord decide to place their trust in each other.

Spanning a decade and playing out in Washington, D.C., Pakistan, and Afghanistan, "Blood and Gifts" is a sweeping, often shockingly funny epic set against one of the greatest historical events of recent history, the repercussions of which continue to shape our world.

Title: Blood and Gifts: A Play

Blood and Gifts: A Play