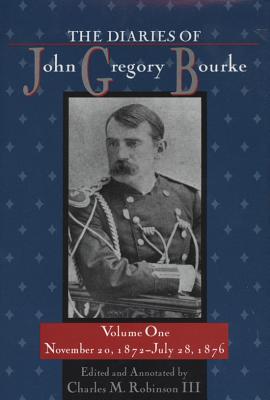 1574411616 some shelfwear/edgewear but still NICE! - may have remainder mark or previous owner's name

John Gregory Bourke kept a monumental set of diaries beginning as a young cavalry lieutenant in Arizona in 1872, and ending the evening before his death in 1896. As aide-de-camp to Brigadier General George Crook, he had an insider's view of the early Apache campaigns, the Great Sioux War, the Cheyenne Outbreak, and the Geronimo War. Bourke's writings reveal much about military life on the western frontier, but he also was a noted ethnologist, writing extensive descriptions of American Indian civilization and illustrating his diaries with sketches and photographs.
Previously, researchers could consult only a small part of Bourke's diary material in various publications, or else take a research trip to the archive and microfilm housed at West Point. Now, for the first time, the 124 manuscript volumes of the Bourke diaries are being compiled, edited, and annotated by Charles M. Robinson III, in a planned set of six books easily accessible to the modern researcher.
Volume 1 begins with Bourke's years as aide-de-camp to General Crook during the Apache campaigns and in dealings with Cochise. Bourke's ethnographic notes on the Apaches continued with further observations on the Hopis in 1874. The next year he turned his pen on the Sioux and Cheyenne during the 1875 Black Hills Expedition, writing some of his most jingoistic comments in favor of Manifest Destiny. This volume culminates with the momentous events of the Great Sioux War and vivid descriptions of the Powder River fight and the Battle of the Rosebud.
Extensively annotated and with a biographical appendix on Indians, civilians, and military personnel named in the diaries, this book will appeal to western and military historians, students of American Indian life and culture, and to anyone interested in the development of the American West.