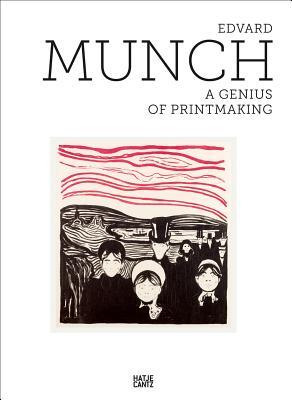 Edvard Munch: A Genius of Printmaking

Love, pain and death; passion, loneliness and sorrow--the entire oeuvre of Edvard Munch (1863-1944) revolves around the fundamental experiences of human existence. Munch is regarded as one of the trailblazers of the Expressionist currents that informed European painting in the early twentieth century. Throughout, Munch's graphic works were not by-products but rather a central element of his oeuvre, from the first etchings in 1894 to the lithographs he made just before his death. Among the masterpieces included in this representative volume of images and texts are graphic versions of Munch's world-famous subjects in the form of large-format color lithographs, etchings, woodcuts, hand-colored prints and experimental prints on colored paper. Munch's graphic works, in which he achieved a persuasive condensation of his major Symbolist allegories, captivate the viewer with their subtle color palettes and their expressive sense of reduction.
Edvard Munch (1863-1944) was born in Loton, Norway, and studied design and art in Oslo. In May of 1885 he traveled to Paris on a scholarship, and after the deaths of his sister and father the following year, he began to spend most of his time in France. His painting first achieved fame--or notoriety--with an 1892 exhibition in Berlin, which also led directly to his influence upon the German Expressionists. Despite struggles with alcohol and mental health, Munch lived to the age of 80.

Edvard Munch: A Genius of Printmaking