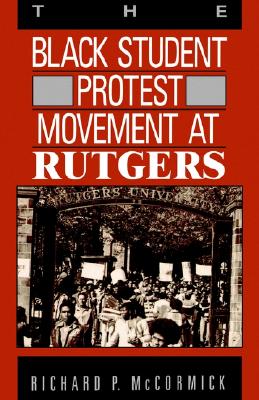 Richard P. McCormick has chronicled the black student protest movement at Rutgers University, from the 1960s to today. He examines the forces that produced the protest movement, the tactics that were employed, and the qualified gains that were achieved. He tells us about demonstrations, building occupations, committee hearings, and countless meetings, but he also paints portraits of the many student leaders who mobilized protest. This is the story of a lot of pain, some blunders, and some successes.

In the mid-sixties, the University established committees to recruit black students and to add more blacks to the faculty. These efforts produced only modest results. By 1968, there were still not enough black students on campus, but there were enough to create a political presence for the first time. They were committed to acting against the racism they perceived within the University. To respond to their protests, in March 1969 the Board of Governors passed a dramatically new and controversial policy to encourage disadvantaged students who lived in Camden, Newark, and New Brunswick to apply to Rutgers, where they would take college-preparatory classes as unmatriculated students, and then enter Rutgers as matriculated students. This program, never very successful, lasted only two years.

Unrest did not end with the sixties. During the seventies, black students sporadically voiced protests against what they perceived to be an unsupportive environment. During the eighties, black enrollment actually declined, as did the black graduation rate. In conclusion, McCormick points to the effort that has been made but even more to the effort that still needs to be made and the social cost of ignoring the problem.