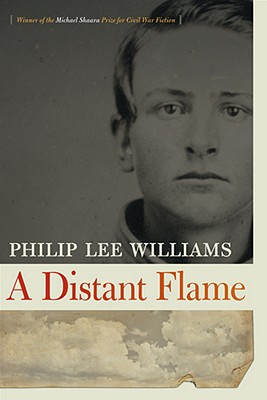 A Distant Flame: A Novel

A young Confederate sharpshooter, Charlie Merrill, has already suffered many losses in his life, but he must find a way to endure--and to grow--if he is to survive the battles he and his fellow soldiers face in July 1864 at the gates of Atlanta. From the opening salvos on Rocky Face Ridge in northwest Georgia through the trials of Resaca and Kennesaw Mountain, Charlie faces the overwhelming force of the Union army and a growing uncertainty about his place in the war.

Framed by a story that finds the elderly Charlie giving a speech on the fiftieth anniversary of the Battle of Atlanta, A Distant Flame portrays love, violence, and regret about wrong paths taken. With an attention to historical detail that brings the past powerfully to the present, Philip Lee Williams reveals Charlie's journey of redemption from the Civil War's fields of fire to the slow steps of old age.

Title: A Distant Flame: A Novel

A Distant Flame: A Novel