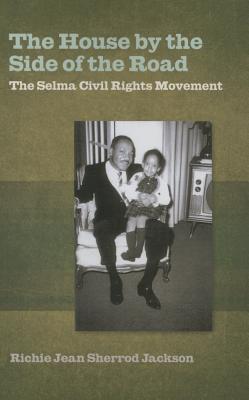 The House by the Side of the Road: The Selma Civil Rights Movement

On Sunday, March 7, 1965, Martin Luther King Jr. and six hundred followers set out on foot from Selma, Alabama, bound for Montgomery to demand greater voting rights for African Americans. As they crossed the city's Edmund Pettus Bridge, state and local policemen savagely set on the marchers with tear gas and billy clubs, an event now known as "Bloody Sunday" that would become one of the most iconic in American history.

King's informal headquarters in Selma was the home of Dr. Sullivan and Richie Jean Sherrod Jackson and their young daughter, Jawana. The House by the Side of the Road is Richie Jean's firsthand account of the private meetings King and his lieutenants, including Ralph David Abernathy and John Lewis, held in the haven of the Jackson home.

Sullivan Jackson was an African American dentist in Selma and a prominent supporter of the civil rights movement. Richie Jean was a close childhood friend of King's wife, Coretta Scott King, a native of nearby Marion, Alabama. Richie Jean's fascinating account narrates how, in the fraught months of 1965 that preceded the Voting Rights March, King and his inner circle held planning sessions and met with Assistant Attorney General John Doar to negotiate strategies for the event.

Just eight days after Bloody Sunday, President Lyndon Johnson made a televised addressed to a joint session of Congress on Monday, March 15. Jackson relates the intimate scene of King and his lieutenants watching as Johnson called the nation to dedicate itself to equal rights for all and ending his address with the words: "We shall overcome." Five months later, Congress passed the 1965 Voting Rights Act on August 6.

The major motion picture Selma now commemorates the fiftieth anniversary of Bloody Sunday and the 1965 Voting Rights Act. In it, Niecy Nash and Kent Faulcon star as Sullivan and Richie Jean Jackson among a cast including Oprah Winfrey, Tom Wilkinson, and Cuba Gooding Jr. A gripping primary source, The House by the Side of the Road illuminates the private story whose public outcomes electrified the world and changed the course of American history.

Title: The House by the Side of the Road: The Selma Civil Rights Movement

The House by the Side of the Road: The Selma Civil Rights Movement