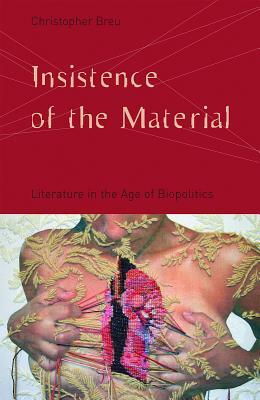 Insistence of the Material: Literature in the Age of Biopolitics

Insistence of the Material engages with recent theories of materiality and biopolitics to provide a radical reinterpretation of experimental fiction in the second half of the twentieth century. In contrast to readings that emphasize the metafictional qualities of these works, Christopher Breu examines this literature's focus on the material conditions of everyday life, from the body to built environments, and from ecosystems to economic production.

In Insistence of the Material, Breu rethinks contemporary understandings of biopolitics, affirming the importance of forms of materiality that refuse full socialization and resist symbolic manipulation. Breu considers a range of novels that reflect questions of materiality in a biopolitical era, including William Burroughs's Naked Lunch, Thomas Pynchon's V., J. G. Ballard's Crash, Dodie Bellamy's The Letters of Mina Harker, and Leslie Marmon Silko's Almanac of the Dead. Drawing from accounts of the emergence of immaterial production and biopolitics by Michel Foucault, Giorgio Agamben, Roberto Esposito, and Michael Hardt and Antonio Negri, Breu reveals the confrontational dimensions of materiality itself in a world devoted to the idea of its easy malleability and transcendence.

Taking his analysis beyond the boundaries of literature, Breu argues that both materiality and subjectivity form sites of resistance to biopolitical control and that new developments in materialist theory advance a conception of social existence in which materiality--rather than language or culture--is the central term.

Title: Insistence of the Material: Literature in the Age of Biopolitics

Insistence of the Material: Literature in the Age of Biopolitics