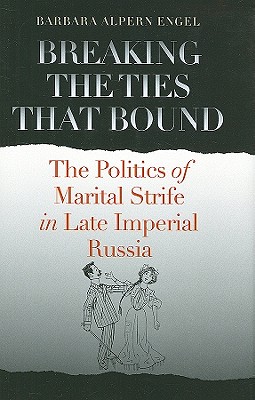 Breaking the Ties That Bound: The Politics of Marital Strife in Late Imperial Russia

Russia's Great Reforms of 1861 were sweeping social and legal changes that aimed to modernize the country. In the following decades, rapid industrialization and urbanization profoundly transformed Russia's social, economic, and cultural landscape. Barbara Alpern Engel explores the personal, cultural, and political consequences of these dramatic changes, focusing on their impact on intimate life and expectations and the resulting challenges to the traditional, patriarchal family order, the cornerstone of Russia's authoritarian political and religious regime. The widely perceived "marriage crisis" had far-reaching legal, institutional, and political ramifications. In Breaking the Ties That Bound, Engel draws on exceptionally rich archival documentation--in particular, on petitions for marital separation and the materials generated by the ensuing investigations--to explore changing notions of marital relations, domesticity, childrearing, and intimate life among ordinary men and women in imperial Russia.

Engel illustrates with unparalleled vividness the human consequences of the marriage crisis. Her research reveals in myriad ways that the new and more individualistic values of the capitalist marketplace and commercial culture challenged traditional definitions of gender roles and encouraged the self-creation of new social identities. Engel captures the intimate experiences of women and men of the lower and middling classes in their own words, documenting instances not only of physical, mental, and emotional abuse but also of resistance and independence. These changes challenged Russia's rigid political order, forcing a range of state agents, up to and including those who spoke directly in the name of the tsar, to rethink traditional understandings of gender norms and family law. This remarkable social history is thus also a contribution to our understanding of the deepening political crisis of autocracy.

Title: Breaking the Ties That Bound: The Politics of Marital Strife in Late Imperial Russia

Breaking the Ties That Bound: The Politics of Marital Strife in Late Imperial Russia