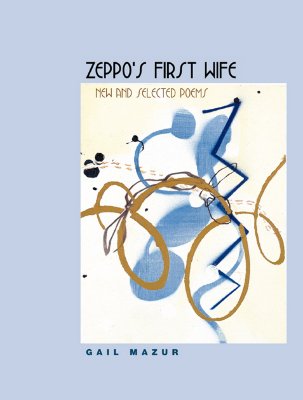 from "Enormously Sad"
. . . Sad, so sad-compared to what?
To your earlier more oblivious state?
It never was oblivious enough-
always those presentiments of sadness
prickling the limbic. Now a voice says, "Get outside"
"yourself, go walk on the flats. The tide's gone out "
but your little metal detector will detect little metallic coins
of enormous sadness in the teeming wet sand,
and then, the tide will come back, erasing, cleansing
And you, standing there in the salty scouring air-
will you still be" enormously sad,"
While the other world, outside your tiny purview, struck
by iron, reels? World of intentional iron, pure savage
organized iron of the world, it hasn't the time
that you have for your puny enormous sadness.
Widely acclaimed for expanding the stylistic boundaries of both the narrative and meditative lyric, Gail Mazur s poetry crackles with verbal invention as she confronts the inevitable upheavals of a lived life. "Zeppo s First Wife," which includes excerpts from Mazur s four previous books, as well as twenty-two new poems, is epitomized by the worldly longing of the title poem, with its searching poignancy and comic bravura. Mazur s explorations of this fallen world, this loony world are deeply moving acts of empathy by a singular moral sensibility evident from the earliest poem included here, the much-anthologized Baseball, a stunning bird s-eye view of human foibles and passions. Clear-eyed, full of paradoxical griefs and appetites, her poems brave the most urgent subjects from the fraught luscious Eden of the ballpark, to the fragility of our closest human ties, to the implications for America in a world where power and war are cataclysmic for the strong as well as the weak."