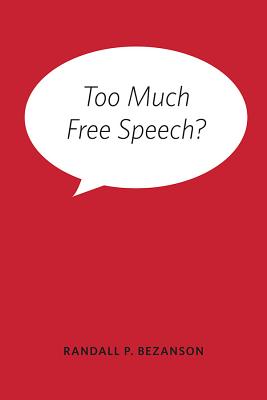 Too Much Free Speech?

In Too Much Free Speech?, Randall P. Bezanson takes up an essential and timely inquiry into the Constitutional limits of the Supreme Court's power to create, interpret, and enforce one of the essential rights of American citizens. Analyzing contemporary Supreme Court decisions from the past fifteen years, Bezanson argues that judicial interpretations have fundamentally and drastically expanded the meaning and understanding of "speech." Bezanson focuses on judgments such as the much-discussed Citizens United case, which granted the full measure of constitutional protection to speech by corporations, and the Doe vs. Reed case in Washington state, which recognized the signing of petitions and voting in elections as acts of free speech. In each case study, he questions whether the meaning of speech has been expanded too far and critically assesses the Supreme Court's methodology in reaching and explaining its expansive conclusions. Bezanson's measured approach and deep insights reveal the complexities of speech in the realms of human behavior and constitutional law. His wide-ranging analysis of relevant Supreme Court cases arms readers with the facts and perspectives necessary to reach independent conclusions about whether the Court's conduct befitted the independent judicial branch and to understand the consequences of its decisions for a representative democracy.

Title: Too Much Free Speech?

Too Much Free Speech?