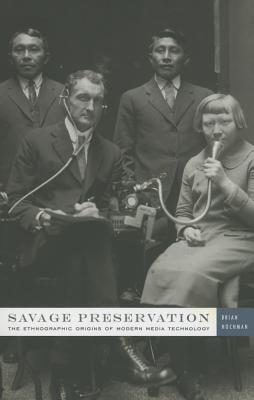 During the late nineteenth and early twentieth centuries, writers and anthropologists believed that the world's primitive races were on the brink of extinction. They also believed that films, photographs, and phonographic recordings--modern media in their technological infancy--could capture lasting relics of primitive life before it vanished into obscurity. For many Americans, the promise of media and the problem of race were inextricably linked. While professional ethnologists tried out early recording machines to preserve the sounds of authentic indigenous cultures, photographers and filmmakers hauled newfangled equipment into remote corners of the globe to document rituals and scenes that seemed destined to vanish forever.

In Savage Preservation, Brian Hochman shows how widespread interest in recording vanishing races and disappearing cultures influenced audiovisual innovation, experimentation, and use in the United States. Drawing extensively on seldom-seen archival sources--from phonetic alphabets and sign language drawings to wax cylinder recordings and early color photographs--Hochman uncovers the parallel histories of ethnography and technology in the turn-of-the-century period. While conventional wisdom suggests that media technologies work mostly to produce ideas about race, Savage Preservation reveals that the reverse has also been true. During this period, popular conceptions of race constructed the authority of new media technologies as reliable archives of the real.

Brimming with nuanced critical insights and unexpected historical connections, Savage Preservation offers a new model for thinking about race and media in the American context--and a fresh take on a period of accelerated technological change that closely resembles our own.