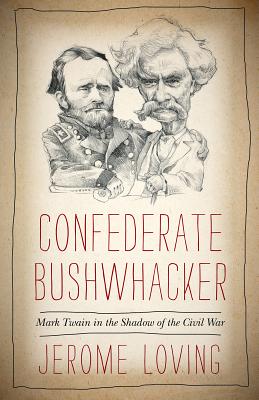 Confederate Bushwhacker: Mark Twain in the Shadow of the Civil War

Confederate Bushwhacker is a microbiography set in the most important and pivotal year in the life of its subject. In 1885, Mark Twain was at the peak of his career as an author and a businessman, as his own publishing firm brought out not only the U.S. edition of Adventures of Huckleberry Finn but also the triumphantly successful Personal Memoirs of U. S. Grant. Twenty years after the end of the Civil War, Twain finally tells the story of his past as a deserter from the losing side, while simultaneously befriending and publishing the general from the winning side. Coincidentally, the year also marks the beginning of Twain's descent into misfortune, his transformation from a humorist into a pessimist and determinist. Interwoven throughout this portrait are the headlines and crises of 1885--black lynchings, Indian uprisings, anti-Chinese violence, labor unrest, and the death of Grant. The year was at once Twain's annus mirabilis and the year of his undoing. The meticulous treatment of this single year by the esteemed biographer Jerome Loving enables him to look backward and forward to capture both Twain and the country at large in a time of crisis and transformation.

Title: Confederate Bushwhacker: Mark Twain in the Shadow of the Civil War

Confederate Bushwhacker: Mark Twain in the Shadow of the Civil War