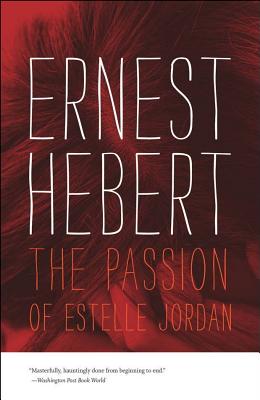 Sometimes the characters in Ernest Hebert's Darby Chronicles hew close to real life. When the author was a college student pulling shifts part time at a hospital laundry, he worked alongside a woman in her fifties--unadorned, sweet-natured, and with long gray-black hair that was her pride. Nights, Hebert frequented the beer bar in Keene, New Hampshire, where he encountered a sassy, self-empowered, forty-something bleached blonde who could bamboozle any man she met. Borrowing qualities from these women, Hebert would shape one of his most memorable characters: Estelle, the "witch" of the Jordan clan.

A major character in earlier Darby novels A Little More Than Kin and Whisper My Name, Estelle takes center stage in The Passion of Estelle Jordan. Presently she is sliding into late middle age, drawn to two lovers who could not be more different: the widowed farmer Avalon Hillary and a mysterious young punk Estelle calls Trans Am in honor of the car he drives. And there's a threat, not to Estelle--she can take care of herself--but to Noreen Cook, a younger woman Estelle sees as a version of her own secret, vulnerable self. Putting herself in Noreen's shoes to save her, Estelle may be in for way more than she bargained for. The Passion of Estelle Jordan, like that of Christ, is rife with sin, suffering, sacrifice, and perhaps redemption. The Passion of Estelle Jordan is for anyone--male or female--going through a change of life.