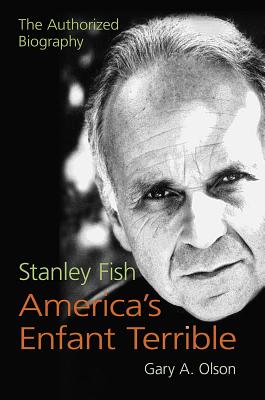 One of the twentieth century s most original and influential literary theorists, Stanley Fish is also known as a fascinatingly atypical, polarizing public intellectual; a loud, cigar-smoking contrarian; and a lightning rod for both the political right and left. The truth and the limitations of this reputation are explored in Stanley Fish, America s Enfant Terrible by Gary A. Olson. At once a literary biography and a traditional life story, this engrossing volume details Fish s vibrant personal life and his remarkably versatile career.
Born into a tumultuous family, Fish survived life with an emotionally absent father and a headstrong mother through street sports and troublemaking as much as through his success at a rigorous prep school. As Olson shows, Fish s escape from the working-class neighborhoods of 1940s and 1950s Providence, Rhode Island, came with his departure for the university life at the University of Pennsylvaniaand then Yale. His meteoric rise through the academic ranks at a troubled Vietnam-eraUC-Berkeley was complemented by a 1966 romp through Europe that included drag racing through the streets of Seville in his Alfa Romeo. He went on to become an internationally prominent scholar at Johns Hopkins before moving to Duke, where he built a star-studded academic department that became a key site in the culture and theory wars of the 1980s and 1990s. Olson discusses Fish s tenure as a highly visible dean at the University of Illinois at Chicago who clashed publicly with the state legislature. He also covers Fish s most remarkable and controversial books, including Fish s masterpiece, Surprised by Sin: The Reader in "Paradise Lost, " which was a critical sensation and forever changed the craft of literary criticism, as well as Professional Correctness and Save the World on Your Own Time, two books that alienated Fish from most liberal-minded professors in English studies.
Olson concludes his biography of Fish with an in-depth analysis of the contradictions between Fish s public persona and his private personality, examining how impulses and events from Fish s childhood shaped his lifelong practices and personality traits. Also included are a chronology of the major events of Fish s life and never-before-published photos.
Based on hundreds of hours of recorded interviews with friends, enemies, colleagues, former students, family members, and Fish himself, along with material from the Stanley Fish archive, Stanley Fish, America s Enfant Terrible is a clearly written narrative of the life of an important and controversial scholar."