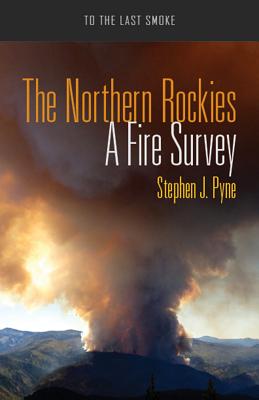 The Northern Rockies: A Fire Survey (To the Last Smoke)

It's a place of big skies and big fires, big burns like those of 1910 and 1988 that riveted national attention. Conflagrations like those of 1934 and 2007 that reformed national policy. Blowups like that in Mann Gulch that shaped the literature of American fire. Big fires mostly hidden in the backcountry like the Fitz Creek and Howler fires that inspired the practice of managed wildfires. Until the fire revolution of the 1960s, no region so shaped the American way of fire.

The Northern Rockies remain one of three major hearths for America's fire culture. They hold a major fire laboratory, an equipment development center, an aerial fire depot, and a social engagement with fire--even a literature. Missoula is to fire in the big backcountry what Tallahassee is to prescribed burning and what Southern California is to urban-wildland hybrids. On its margins, Boise hosts the National Interagency Fire Center. In this structured collection of essays on the region, Stephen J. Pyne explores what makes the Northern Rockies distinctive and what sets it apart from other regions of the country. Surprisingly, perhaps, the story is equally one of big bureaucracies and of generations that encounter the region's majestic landscapes through flame.

The Northern Rockies is part of a multivolume series describing the nation's fire scene region by region. The volumes in To the Last Smoke also cover Florida, the Northern Rockies, the Great Plains, the Southwest, and several other critical fire regions. The series serves as an important punctuation point to Pyne's 50-year career with wildland fire--both as a firefighter and a fire scholar. These unique surveys of regional pyrogeography are Pyne's way of "keeping with it to the end," encompassing the directive from his rookie season to stay with every fire "to the last smoke."

Title: The Northern Rockies: A Fire Survey (To the Last Smoke)

The Northern Rockies: A Fire Survey (To the Last Smoke)