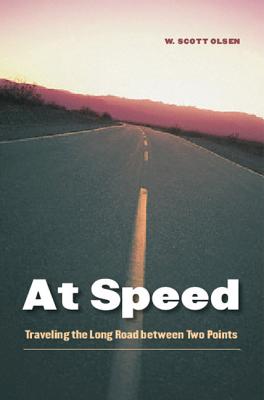 At Speed: Traveling the Long Road between Two Points

From the lowest highway in North America to the highest, W. Scott Olsen takes readers on a journey that is more about going than about getting there. These are stories of travel as it is lived, essays about motion and the desire to keep moving. In a companionable style that puts readers in the passenger seat, Olsen describes his travels through the United States, observing the world close-up as it rushes toward and then away from his old Jeep. The Upper Peninsula in March, a one-day drive from Death Valley to Mount Evans, a harrowing trip from Fargo to Spokane in the dead of winter: these journeys and others offer opportunities for Olsen's unconventional narrative to take flight in exploring the intricacies of America, its small towns, its people, its roads, its histories, and its landscapes in vistas long and short that might otherwise be overlooked. In Olsen's hands, travels along the most American routes of the heartland become an addictive tale that will appeal to anyone who has ever wondered what lies over the next hill. W. Scott Olsen is a professor of English at Concordia College in Moorhead, Minnesota. In addition to being editor in chief of Ascent, a literary magazine of fiction, essays, and poetry, he is the author of several books, including Gravity, The Allure of Distance: Essays on the Act of Travel, as well as the editor of several anthologies, including A Year in Place.

Title: At Speed: Traveling the Long Road between Two Points

At Speed: Traveling the Long Road between Two Points