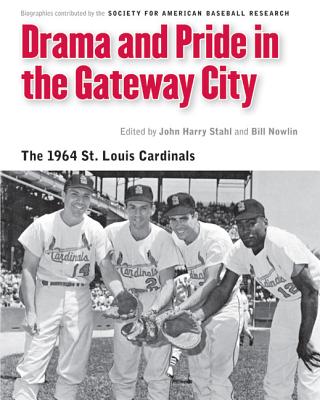 Drama and Pride in the Gateway City: The 1964 St. Louis Cardinals (Memorable Teams in Baseball History)

By 1964 the storied St. Louis Cardinals had gone seventeen years without so much as a pennant. Things began to turn around in 1953, when August A. Busch Jr. bought the team and famously asked where all the black players were. Under the leadership of men like Bing Devine and Johnny Keane, the Cardinals began signing talented players regardless of color, and slowly their star started to rise again.

Drama and Pride in the Gateway City commemorates the team that Bing Devine built, the 1964 team that prevailed in one of the tightest three-way pennant races of all time and then went on to win the World Series, beating the New York Yankees in the full seven games. All the men come alive in these pages--pitchers Ray Sadecki and Bob Gibson, players Lou Brock, Curt Flood, and Bobby Shantz, manager Johnny Keane, his coaches, the Cardinals' broadcasters, and Bill White, who would one day run the entire National League--along with the dramatic events that made the 1964 Cardinals such a memorable club in a memorable year.

Drama and Pride in the Gateway City: The 1964 St. Louis Cardinals (Memorable Teams in Baseball History)