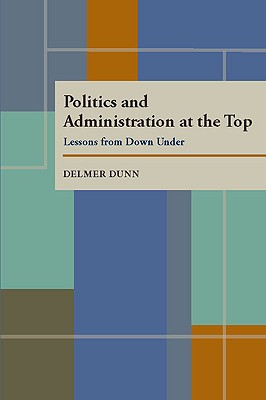 Politics and Administration at the Top: Lessons from Down Under (Pitt Series in Policy and Institutional Studies)

Dunn focuses on two levers of power in modern democracies, the elected party politician and the professional state bureaucrat, using Australia as his example. Dunn uses interviews with Cabinet ministers, members of their staffs, and department heads of two governments in Australia to see how ministers seek to provide political direction to the bureaucracy. He examines the extent to which they succeed and how their direction is both influenced by and acted on by the departments.
Dunn's analysis provides a rare look at high-level relationships between politicians and executive departments in one democratic government and offers insights into issues of accountability and responsibility in democratic governments. His findings, based on his in-depth look at a government that blends many features of both U.S. and British governments, reveal the fundamentals that are necessary to make this key relationship work well and are thus pertinent to public administration in all democracies.

Title: Politics and Administration at the Top: Lessons from Down Under (Pitt Series in Policy and Institutional Studies)

Politics and Administration at the Top: Lessons from Down Under (Pitt Series in Policy and Institutional Studies)