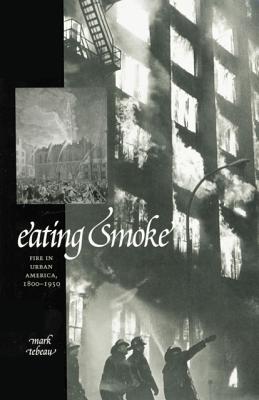 During the period of America's swiftest industrialization and urban growth, fire struck fear in the hearts of city dwellers as did no other calamity. Before the Civil War, sweeping blazes destroyed more than $200 million in property in the nation's largest cities. Between 1871 and 1906, conflagrations left Chicago, Boston, Baltimore, and San Francisco in ruins. Into the twentieth century, this dynamic hazard intensified as cities grew taller and more populous, confounding those who battled it. Firefighters' death-defying feats captured the popular imagination but too often failed to provide more than symbolic protection. Hundreds of fire insurance companies went bankrupt because they could not adequately deal with the effects of even smaller blazes.

Firefighters and fire insurers created a physical and cultural infrastructure whose legacy--in the form of heroic firefighters, insurance policies, building standards, and fire hydrants--lives on in the urban built environment. In Eating Smoke, Mark Tebeau shows how the changing practices of firefighters and fire insurers shaped the built landscape of American cities, the growth of municipal institutions, and the experience of urban life. Drawing on a wealth of fire department and insurance company archives, he contrasts the invention of a heroic culture of firefighters with the rational organizational strategies by fire underwriters. Recognizing the complexity of shifting urban environments and constantly experimenting with tools and tactics, firefighters fought fire ever more aggressively--"eating smoke" when they ventured deep into burning buildings or when they scaled ladders to perform harrowing rescues. In sharp contrast to the manly valor of firefighters, insurers argued that the risk was quantifiable, measurable, and predictable. Underwriters managed hazard with statistics, maps, and trade associations, and they eventually agitated for building codes and other reforms, which cities throughout the nation implemented in the twentieth century. Although they remained icons of heroism, firefighters' cultural and institutional authority slowly diminished. Americans had begun to imagine fire risk as an economic abstraction.

By comparing the simple skills employed by firefighters--climbing ladders and manipulating hoses--with the mundane technologies--maps and accounting charts--of insurers, the author demonstrates that the daily routines of both groups were instrumental in making intense urban and industrial expansion a less precarious endeavor.