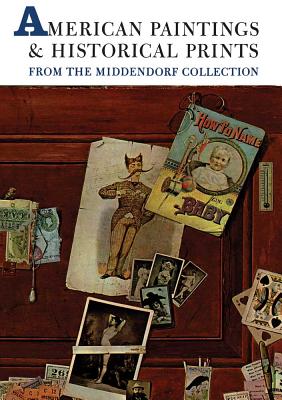 American Paintings and Historical Prints from the Middendorf Collection

With the exception of two family portraits by Charles Willson Peale and Alfred Jacob Miller, all of the pictures included in this exhibition are owned by Mr. and Mrs. J. William Middendorf II. Selected from more than two hundred works, they range from the first mezzotint engraved in the Colonies to a powerful figure piece done in 1926 by the Provincetown painter Charles W. Hawthorne. The collection formed by Isabelle and Bill Middendorf is not a panoramic survey of American art of this period, but rather is a collection of collections, reflecting their changing tastes and interests over as short a period as a dozen years. The Middendorfs' first acquisitions were American historical prints, a field that was wildly competitive a half-century ago, but one that has been less actively pursued in recent years because of the extreme rarity of the material. Soon they began to add portraits of important historical figures by such artists as Gilbert Stuart, John Trumbull, James Sharples, and William R. Birch, and gradually their interest in painting expanded to included representative works by some of the leading landscape, genre, and still-life painters of the nineteenth century. On the lookout for such "textbook" masterpieces as Frederic Church's Rainy Season in the Tropics, Emanuel Leutze's Washington Crossing the Delaware, Seth Eastman's Chippewa Indians Playing Checkers, and John Haberle's A Bachelor's Drawer, they have also sought outstanding works by such little-known artists as Ferdinand Richardt, Jefferson David Chalfant, Andrew Melrose, and Alexander Pope. "We have attempted to collect American paintings and prints," Mr. Middendorf wrote, "in such a way as to show both the American experience and our nation's artistic accomplishments." The group of pictures gathered here is a testimony to their success, for in the breathtaking watercolors of Thomas Moran and John LaFarge, the delicate portrait miniatures of John Ramage, Charles Willson Peale, and James Peale, the homespun genre scenes of Eastman Johnson and William Sidney Mount, and the spirited engravings of Amos Doolittle, Paul Revere, and Bernard Romans, to name but a few, the American experience and our diverse artistic achievements are vividly presented. This book was originally published in 1967 and has gone out of print. This edition is a print-on-demand version of the original book.]

Title: American Paintings and Historical Prints from the Middendorf Collection

American Paintings and Historical Prints from the Middendorf Collection