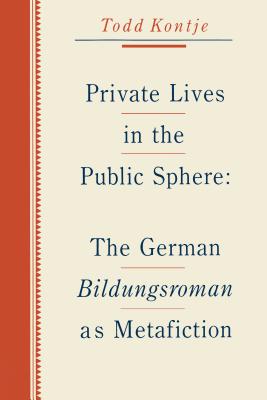 Private Lives in the Public Sphere: The German Bildungsroman as Metafiction

Private Lives in the Public Sphere examines the Bildungsroman in the context of the rapid changes that affected the German literary revolution that made up for its belatedness in its rapidity and scope. The nature and quantity of reading material produced, the social status of the writer, and the reading habits of the public changed dramatically within a few decades. At the beginning of the century the new texts that appeared at the annual book fairs were primarily written in Latin and devoted to theology. By the end of the century the number of new publications each year has increased almost exponentially, with the novel leading the way. This new institution of literature constituted an important part of what J rgen Habermas has termed the "public sphere," a forum for public debate in which members of the middle class, although still limited in their direct access to political power, could at least begin to articulate their problems and formulate their hopes. The Bildungsroman emerged during this period.

This study focuses on moments of literary self-consciousness in the Bildungsroman as reflections on the rapid transformation of the German literary institution. The novels are viewed as examples of what Patricia Waugh has called "metafiction," that is, "fictional writing which self-consciously and systematically draws attention to its status as an artifact in order to pose questions about the relationship between fiction and reality." By concentrating on the interaction between literary form and institutional context in these novels, it becomes possible to mediate between the extremes of those who would view literature as a mere reflection of historical conditions and those who would maintain the purity of the aesthetic object. Literature in this view neither re-creates reality nor does it escape reality; instead, it transforms reality, and the Bildungsroman is the genre that examines this transformation.

Title: Private Lives in the Public Sphere: The German Bildungsroman as Metafiction

Private Lives in the Public Sphere: The German Bildungsroman as Metafiction