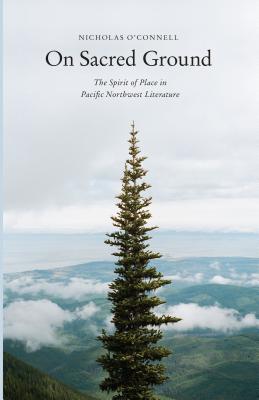 On Sacred Ground: The Spirit of Place in Pacific Northwest Literature

On Sacred Ground explores the literature of the Northwest, the area that extends from the Pacific Ocean to the Rocky Mountains, and from the forty-ninth parallel to the Siskiyou Mountains. The Northwest exhibits astonishing geographical diversity and yet the entire bioregion shares a similarity of climate, flora, and fauna.

For Nicholas O'Connell, the effects of nature on everyday Northwest life carry over to the region's literature. Although Northwest writers address a number of subjects, the relationship between people and place proves the dominant one, and that has been true since the first tribes settled the region and began telling stories about it, thousands of years ago. Indeed, it is the common thread linking Chief Seattle to Theodore Roethke, Narscissa Whitman to Ursula K. Le Guin, Joaquin Miller to Ivan Doig, Marilynne Robinson to Jack London, Betty MacDonald to Gary Snyder.

Tracing the history of Pacific Northwest literary works--from Native American myths to the accounts of explorers and settlers, the effusions of the romantics, the sharply etched stories of the realists, the mystic visions of Northwest poets, and the contemporary explosion of Northwest poetry and prose--O'Connell shows how the most important contribution of Northwest writers to American literature is their articulation of a more spiritual human relationship with landscape. Pacific Northwest writers and storytellers see the Northwest not just as a source of material wealth but as a spiritual homeland, a place to lead a rich and fulfilling life within the whole context of creation. And just as the relationship between people and place serves as the unifying feature of Northwest literature, so also does literature itself possess a perhaps unique ability to transform a landscape into a sacred place.

Title: On Sacred Ground: The Spirit of Place in Pacific Northwest Literature

On Sacred Ground: The Spirit of Place in Pacific Northwest Literature