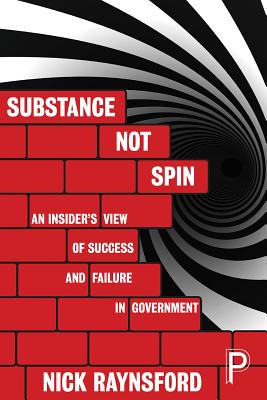 Substance not Spin: An Insider's View of Success and Failure in Government

Why does policy succeed or fail? In Substance not Spin, Nick Raynsford, a former member of the UK parliament, government minister, and campaigner pulls back the curtain on the front lines of policy making. Drawing on more than forty years of experience working at the very heart of both local and national government and the voluntary sector, Raynsford explores what works and what doesn't in making and implementing policy and legislation. He gives an insider's view on a range of events--some not previously made public--including the botched 1980s reform of housing benefit legislation, the vacuum left by the 1986 abolition of the Greater London Council, the ill-fated 2002 fire and rescue service strike and subsequent reform program, and fitful regeneration in the Thames Gateway in the 2000s. Bringing his investigation up to the current day, he even explores various devolution plans leading to the so-called Northern Powerhouse of the Coalition and now Conservative Government. Offering solutions to obstacles in policy making and implementation and challenging the prevailing public belief that politicians are unable to deliver, Substance not Spin provides a fascinating bridge across the political divide between policy and practice.

Title: Substance not Spin: An Insider's View of Success and Failure in Government

Substance not Spin: An Insider's View of Success and Failure in Government