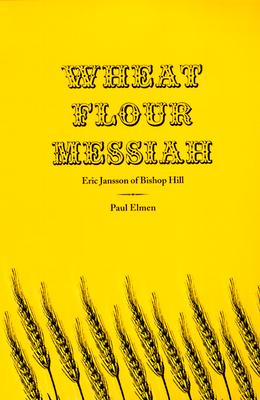 Wheat Flour Messiah follows the career of Eric Jansson from his boyhood on a farm near Biskopskulla (Bishop' s Hill) in Sweden until his murder in Illinois by a crazed follower in 1850. He was an untutored but brilliant charismatic leader, who by sheer insolence and self-confidence defied both the Swedish state church and the secular government and persuaded some twelve hundred of his wheat flour customers to throw in their lot with him. The essence of his teaching was that anyone who so desired could receive the grace of God in such rich measure that he would instantly be freed of sin and live in angelic innocence from then on. This doctrine was an imperfectly understood version of Methodist perfectionism, held without Wesleyan safeguards, and it doomed his followers to civil war against the Lutheran church.

Jansson went north to H lsingland in Sweden to sell wheat flour, but his deeper intention was to hold large religious services in the farmyards of followers. On three occasions he and his followers burned all the allegedly heretical books written by such men as Luther, Nohrborg, and Arndt, singing hymns while the flames "destroyed the works of the Devil." Jansson was jailed six times, and six times he was freed. After his last trial, as he was being escorted to jail, he escaped and later arranged passage to America. His disciples followed him in a series of Atlantic crossings during 1847- 49 and settled the utopian colony of Bishop Hill, 150 miles west of Chicago. They built impressive buildings, plowed the virgin prairie, and began some successful industry making wagons and weaving rugs.
Two fateful events spelled the doom of this utopian dream. The first, the cholera epidemic of 1849, killed over two hundred of the colonists. The other was the arrival of John Root, who subsequently married Jansson' s cousin, Charlotte, and who, after a series of altercations with Jansson over Charlotte, shot him to death in Cambridge, Illinois. The colony did not long survive without its Prophet, and ten years later the utopian dream ended. Today Bishop Hill remains little changed from a century ago-- a colorful memory of American beginnings, a vivid reminder of its fascinating past.
Dr. Elmen' s book tells for the first time the life story of a folk hero, Eric Jansson. The Bishop Hill Colony was clearly the lengthened shadow of this extraordinary man. Students of utopian colonies, teachers and students of American history and religious movements will find here a definitive account of this piece of the American past. Any reader interested in the American Dream will enjoy this account of a vanished people who thought they could find somewhere on earth a great, good place, and who had to learn after much suffering that one cannot express in waking reality the character of man in his dreams.