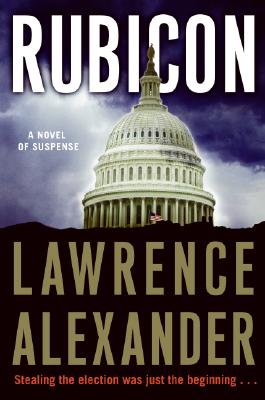 Bobby Hart, an idealistic young senator from California, thinks that he's escaped the political spotlight when he decides not to run for president. Then, on a secret mission to Germany, he discovers that there is going to be an assassination. He doesn't know who is the target, who is behind the plan, or where it will take place. All he knows is that it will happen before the election. And that it operates under the code name Rubicon.

Rubicon, Hart remembers, is the river Caesar crossed with his army when he decided to seize power in Rome. For Caesar it meant that there was no turning back for a republic on its way to becoming an empire. But crossing the Rubicon meant the beginning of an era in Rome. Could it mean the end of something else today?

As events pile up before the predicted attack, it becomes clear that Rubicon isn't just about the election. It's a plot to steal the country. Now Hart is in a race against time to find out who is behind the conspiracy and how to stop it before it's too late and democracy in America is changed forever.

A blistering indictment of our current political climate, Rubicon is an intelligent, action-packed thriller that will change the way readers think about the next election.