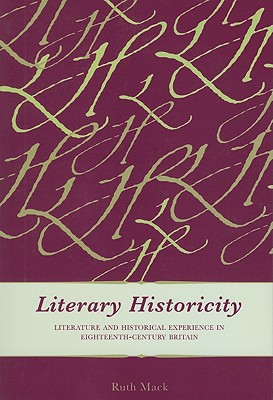 Literary Historicity explores how eighteenth-century British writers considered the past as an aspect of experience. Mack moves between close examinations of literature, historiography, and recent philosophical writing on history, offering a new view of eighteenth-century philosophies of history in Britain. Such philosophies, she argues, could be important literarily without being focused, as has been assumed, on questions of fact and fiction. Eighteenth-century writers--like many twentieth-century philosophers--often used literary form not in order to exhibit a work's fictional status but in order to consider what the relation between the past and present might be. Literary Historicity portrays a British Enlightenment that both embraces the possibility of historical experience and interrogates the terms for such experience, one deeply engaged with historical consciousness not as an inevitability of the modern world, but as something to be understood within it.