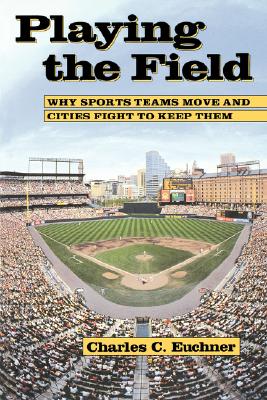 Playing the Field: Why Sports Teams Move and Cities Fight to Keep Them

Can a sports franchise "blackmail" a city into getting what it wants--a new stadium, say, or favorable leasing terms--by threatening to relocate? In 1982, the owners of the Chicago White Sox pledged to keep the team in Chicago if the city approved a $5-million tax-exempt bond to finance construction of luxury suites at Comiskey Park. The city council approved it. A few years later, when Comiskey Park was in need of renovation, the owners threatened to move the team to Florida unless a new stadium was built. A site was chosen near the old stadium, property condemned, residents evicted, and a new stadium built. "We had to make threats," the owners said. "If we didn't have the threat of moving, we wouldn't have gotten the deal."

"Sports is not a dominant industry in any city," writes Charles Euchner, "yet it receives the kind of attention one might expect to be lavished on major producers and employers." In Playing the Field, Euchner looks at why sports attracts this kind of attention and what that says about the urban political process. Examining the relationships between Los Angeles and the Raiders, Baltimore and the Colts and the Orioles, and Chicago and the White Sox, Euchner argues that, in the absence of public standards for equitable arbitration between cities and teams, the sports industry has the ability to steer negotiations in a way that leaves cities vulnerable.

According to Euchner, this greater leverage of sports franchises is due, at least in part, to their overall economic insignificance. Since the demands of a franchise do not directly affect many interest groups, opponents of stadium projects have difficulty developing coalitions to oppose them. The result is that civic leaders tend to succumb to the blackmail tactics of professional sports, rather than developing and supporting sound economic policies.

Title: Playing the Field: Why Sports Teams Move and Cities Fight to Keep Them

Playing the Field: Why Sports Teams Move and Cities Fight to Keep Them