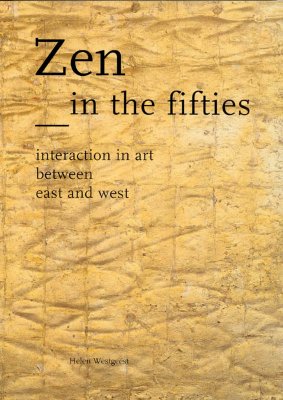 Zen in the Fifties: Interaction in Art between East and West (Waanders)

Throughout Western history, interest in the Far East has moved in waves, in ever-changing patterns. Zen in the Fifties looks at the influence of the East, and of Zen Buddhism in particular, on a number of recent Western artists.
Interest in Zen grew in the 1950s as new artistic, philosophical and psychological theories opened up the way for Western artists to explore both interior and exterior landscapes. Helen Westgeest brings into her analysis the work of John Cage, Ad Reinhardt and Mark Tobey in America, and Yves Klein and Pierre Alechinsky in France, and shows how the ideas, methods and works of these and certain other artists display affinities with those of the Zen masters. The influence of modern Western art on Japanese artists is also discussed, providing a little noticed perspective on the West.
Zen in the Fifties looks at some of the most important centers of modern art in France, Germany, the United States and Japan and offers a fascinating insight into Zen, and the characteristics of Zen art."

Title: Zen in the Fifties: Interaction in Art between East and West (Waanders)

Zen in the Fifties: Interaction in Art between East and West (Waanders)