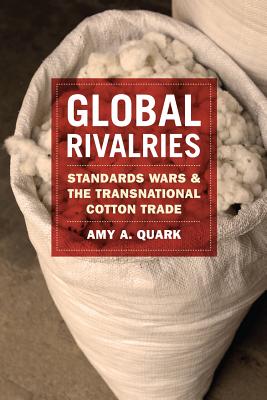 As the economies of China, India, and other Asian nations continue to grow, these countries are seeking greater control over the rules that govern international trade. Setting the rules carries with it the power to establish advantage, so it s no surprise that everyone wants a seat at the table or that negotiations over rules often result in stalemates at meeting of the World Trade Organization.
Nowhere is the conflict over rule setting more evident than in the simmering standards wars over the rules that define quality and enable the adjudication of disputes.In "Global Rivalries," Amy A. Quark explores the questions of how rules are made, who makes them, and how they are enforced, using the lens of cotton a simple commodity that has become a poignant symbol of both the crisis of Western rule making power and the potential for powerful new rivals to supplant it. Quark traces the strategies for influencing rule making processes employed not only by national governments but also by transnational corporations, fiber scientists, and trade associations from around the globe. Quark analyzes the efficacy of their approaches and the implications for more marginal actors in the cotton trade, including producers in West Africa.
By placing the current contest within the historical development of the global capitalist system, "Global Rivalries "highlights a fascinating interaction of politics and economics.
"