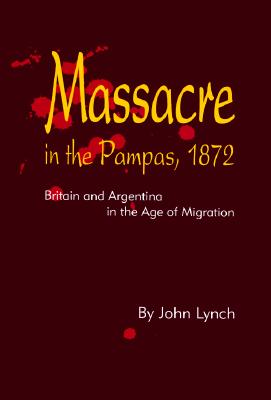 Massacre in the Pampas, 1872: Britain and Argentina in the Age of Migration

Early on New Year's Day, 1872, in the small town of Tandil, Argentina, a rampaging band of armed gauchos killed thirty-six people, mostly immigrant Spaniards, Italians, French, and Britons. The massacre caused alarm and outrage. Some Argentines tried to explain it as a conspiracy among the local elite to frighten foreigners. Others saw it as a cry for help from oppressed gauchos or a mark of millenarian religious fanaticism. Many argued that it was a nativist reaction against immigrants, who took land and work that should belong to Argentines.

The massacre at Tandil has been little studied in Argentina, and this book by John Lynch is the first on the subject outside that country. He sees the massacre both as part of a long history of violence on the Argentine frontier and as a result of xenophobia in combination with economic and social pressures -- a backlash of Argentine natives against foreigners.

By comparing the North American West with the pampas, Lynch points out the variances in violence that can be accounted for by the regions' cultural differences. Further, he argues that security on the pampas did not improve in the years after the massacre, and the Argentine government rejected outside criticism of its failure to protect settlers. The British government, particularly, warned its emigrants, and British outrage clashed with Argentine nationalism, straining relations between the two countries.

Title: Massacre in the Pampas, 1872: Britain and Argentina in the Age of Migration

Massacre in the Pampas, 1872: Britain and Argentina in the Age of Migration