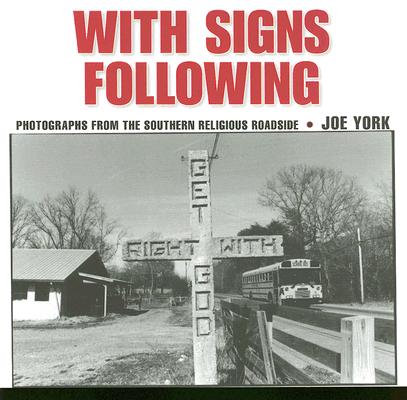 With Signs Following: Photographs from the Southern Religious Roadside

From hand-rendered folk signs to high-dollar church marquees, religious messages and imagery saturate the landscape of the American South. In With Signs Following, photographer and southern studies scholar Joe York introduces readers to the role of artistic, witty advertising in southern churches. In seventy black-and-white images of religious signs and other ephemera, he simultaneously presents the factual while encouraging reflection and introspection.

Though York's pictures speak volumes, With Signs Following features an equally compelling essay by York. This piece seeks the stories of the sign makers through informal interviews. The combination of images and text offers an insightful, humorous, historically grounded perspective on one of the South's most familiar scenes.

In collecting images of religious roadside signs from across the region and interviews with the evangelicals who put them there, Joe York shows us the "Christ-haunted" South as it has never before been considered.

Title: With Signs Following: Photographs from the Southern Religious Roadside

With Signs Following: Photographs from the Southern Religious Roadside