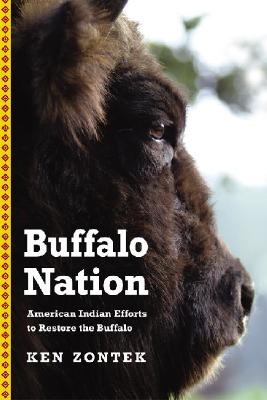 The gruesome story of the devastation of buffalo herds in the late nineteenth century has become uncomfortably familiar. A less familiar story, but a hopeful one for the future, is Ken Zontek's account of Native peoples' efforts to repopulate the Plains with a healthy, viable bison population. Interspersing scientific hypothesis with Native oral traditions and interviews, Buffalo Nation provides a brief history of bison and human interaction from the Paleolithic era to present preservation efforts. Zontek's history of bison restoration efforts is also a history of North American Native peoples' pursuit of political and cultural autonomy, revealing how Native peoples' ability to help the bison has fluctuated with their overall struggle. Beginning in the 1870s, Native North Americans established captive bison breeding programs despite the Wounded Knee Massacre and a massive onslaught on Native cultural and religious practices. These preservation efforts were so successful that a significant percentage of bison today carry the bloodlines of these original Native-sponsored herds. At the end of the twentieth century, more than fifty tribes banded together to form the Intertribal Bison Cooperative. This group has made significant progress in restoring bison herds in the United States, while Canadian First Nations work with national parks and other government entities to select and manage free-ranging herds. Buffalo Nation offers insights into the ways that the Native North American effort to restore the buffalo nation inspires discourse in cultural perseverance, environmentalism, politics, regionalism, spirituality, and the very essence of human-animal interaction. Ken Zontek, PhD, teaches history at Yakima Valley Community College and serves as an adjunct professor at Heritage University on the Yakama Reservation. He is an active scholar in central Washington, and contributed to the Encyclopedia of the Great Plains (Nebraska 2004).