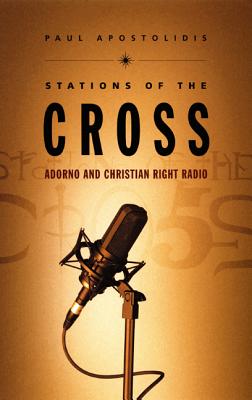 Stations of the Cross: Adorno and Christian Right Radio

Since the 1970s, American society has provided especially fertile ground for the growth of the Christian right and its influence on both political and cultural discourse. In Stations of the Cross political theorist Paul Apostolidis shows how a critical component of this movement's popular culture--evangelical conservative radio--interacts with the current U.S. political economy. By examining in particular James Dobson's enormously influential program, Focus on the Family--its messages, politics, and effects--Apostolidis reveals the complex nature of contemporary conservative religious culture.
Public ideology and institutional tendencies clash, the author argues, in the restructuring of the welfare state, the financing of the electoral system, and the backlash against women and minorities. These frictions are nowhere more apparent than on Christian right radio. Reinvigorating the intellectual tradition of the Frankfurt School, Apostolidis shows how ideas derived from early critical theory--in particular that of Theodor W. Adorno--can illuminate the political and social dynamics of this aspect of contemporary American culture. He uses and reworks Adorno's theories to interpret the nationally broadcast Focus on the Family, revealing how the cultural discourse of the Christian right resonates with recent structural transformations in the American political economy. Apostolidis shows that the antidote to the Christian right's marriage of religious and market fundamentalism lies not in a reinvocation of liberal fundamentals, but rather depends on a patient cultivation of the affinities between religion's utopian impulses and radical, democratic challenges to the present political-economic order.
Mixing critical theory with detailed analysis, Stations of the Cross provides a needed contribution to sociopolitical studies of mass movements and will attract readers in sociology, political science, philosophy, and history.

Title: Stations of the Cross: Adorno and Christian Right Radio

Stations of the Cross: Adorno and Christian Right Radio