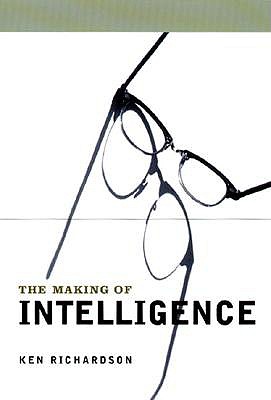 The Making of Intelligence

What do we mean when we describe a person as intelligent? The concept of intelligence wields a powerful influence on research dealing with the brain and on how individuals progress in society. Yet, remarkably, there is no scientific consensus about the meaning of intelligence. In The Making of Intelligence Ken Richardson looks at how intelligence has been characterized and measured in the past, explores current trends in our understanding and uses of the concept, and predicts what form these trends will take in the future.

He argues that intelligence is not solely predetermined by such factors as genes and environment; it is also created by self-organizing interactions within evolved developmental systems. Considering the implications for society of this dynamic-systems approach, Richardson predicts that as our understanding of the relationship between the mind and the brain improves, the notion of intelligence as a single concept may disappear altogether. Richardson takes particularly sharp aim at IQ tests, exposing the reductionist, oversimplified, and contradictory notions of intelligence that they presuppose as well as the social repercussions of the widespread, unreflecting acceptance of the IQ model in public consciousness. From the writings of Charles Darwin and Herbert Spencer on evolution and adaptation to the reflections of Jean Piaget and Lev Vygotsky on logical reasoning; from the formulation of early IQ tests by Francis Binet and Henri Simon to their recent, provocative rebirth in the assertions of The Bell Curve by Charles Murray and Richard Herrnstein, The Making of Intelligence is a lucid, judicious, critical analysis of this controversial and important subject.

Title: The Making of Intelligence

The Making of Intelligence