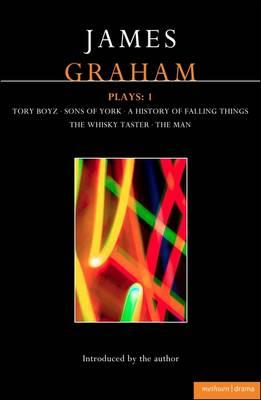 This collection brings together four of Graham's most successful and entertaining plays, each representing a relationship with a theatre with which he has worked and introduced by the author. One of the plays, Sons of York, has never before been published, but earned James Graham a nomination for the Empty Space Mark Marvin Award.

A History of Falling Things is a gentle love story about a young man and woman forced to confront their fears of the outside world and discover what really matters to their lives.

Tory Boyz is a fast-paced, political comedy about prejudice and ambition in Westminster, looking at homosexuality in the British Conservative party, both today and in the past.

As Ben, self-employed, skint and emotionally vulnerable, begins to stitch together the patchwork quilt that was the Tax Year 2009/2010, he relives a year that was both hilarious and tragic, all mixed up in one shoe box of receipts. The Man is an affectionate and funny portrait of an individual's year-long experience, pieced together from receipts, shopping and commercial transactions.

The Whisky Taster is a contemporary, subtle and witty exploration of feeling and perception in the modern world of advertising, and about seeing things too clearly in a city that never stands still.

Sons of York
Described as 'undoubtedly one of the best new plays of the year' (British Theatre Guide), Sons of York depicts three generations of the same family moving in together in Hull as the Winter of Discontent of 1978 builds up.