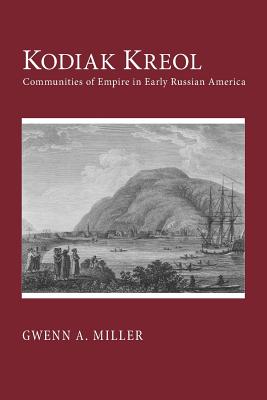 By: Miller, Gwenn A.

From the 1780s to the 1820s, Kodiak Island, the first capital of Imperial Russia's only overseas colony, was inhabited by indigenous Alutiiq people and colonized by Russians. Together, they established an ethnically mixed "kreol" community. Against the backdrop of the fur trade, the missionary work of the Russian Orthodox Church, and competition among Pacific colonial powers, Gwenn A. Miller brings to light the social, political, and economic patterns of life in the settlement, making clear that Russia's modest colonial effort off the Alaskan coast fully depended on the assistance of Alutiiq people.

In this context, Miller argues, the relationships that developed between Alutiiq women and Russian men were critical keys to the initial success of Russia's North Pacific venture. Although Russia's Alaskan enterprise began some two centuries after other European powers--Spain, England, Holland, and France--started to colonize North America, many aspects of the contacts between Russians and Alutiiq people mirror earlier colonial episodes: adaptation to alien environments, the "discovery" and exploitation of natural resources, complicated relations between indigenous peoples and colonizing Europeans, attempts by an imperial state to moderate those relations, and a web of Christianizing practices. Russia's Pacific colony, however, was founded on the cusp of modernity at the intersection of earlier New World forms of colonization and the bureaucratic age of high empire. Miller's attention to the coexisting intimacy and violence of human connections on Kodiak offers new insights into the nature of colonialism in a little-known American outpost of European imperial power.