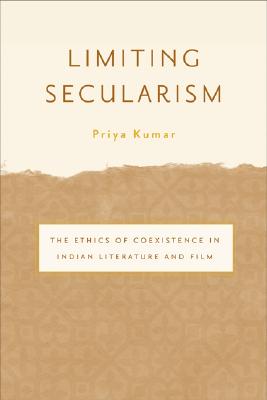 Limiting Secularism: The Ethics of Coexistence in Indian Literature and Film

With a backdrop of religious violence and escalating regional tensions in South Asia, Priya Kumar's Limiting Secularism probes the urgent topic of secularism and tolerance in Indian culture and life. Kumar explores Partition as the founding trauma of the Indian nation-state and traces the consequences of its marking off of "Indian" from "Pakistani" and the positioning of Indian Muslims as strangers within the nation.

Kumar unpacks the implications of the Nehruvian doctrine of tolerance-with all of its resonances of condescension and inequality-and asks whether more ethical cohabitation can replace the "arrogant compulsive tolerance" of the state and the majority. Informed by Jacques Derrida's recent work on hospitality and living together, Kumar argues for the emergence of an "ethics of coexistence" in Indian fiction and film. Considering narratives ranging from the cosmopolitan English novels of Rushdie and Ghosh to literature in South Asian languages as well as recent Hindi cinema, Kumar demonstrates that these fictions are important resources for reimagining tolerance and coexistence.

Distinctive and timely in its investigation of secularism and communalism, Limiting Secularism works to envision the radical possibilities of going beyond tolerance to living well together.

Priya Kumar is associate professor of English at the University of Iowa.

Title: Limiting Secularism: The Ethics of Coexistence in Indian Literature and Film

Limiting Secularism: The Ethics of Coexistence in Indian Literature and Film