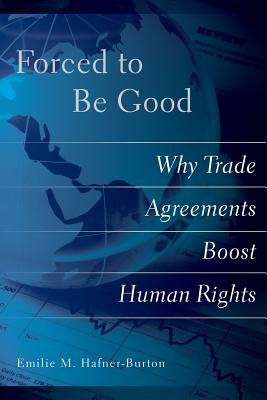 Forced to Be Good: Why Trade Agreements Boost Human Rights

Preferential trade agreements have become common ways to protect or restrict access to national markets in products and services. The United States has signed trade agreements with almost two dozen countries as close as Mexico and Canada and as distant as Morocco and Australia. The European Union has done the same. In addition to addressing economic issues, these agreements also regulate the protection of human rights. In Forced to Be Good, Emilie M. Hafner-Burton tells the story of the politics of such agreements and of the ways in which governments pursue market integration policies that advance their own political interests, including human rights.

How and why do global norms for social justice become international regulations linked to seemingly unrelated issues, such as trade? Hafner-Burton finds that the process has been unconventional. Efforts by human rights advocates and labor unions to spread human rights ideals, for example, do not explain why American and European governments employ preferential trade agreements to protect human rights. Instead, most of the regulations protecting human rights are codified in global moral principles and laws only because they serve policymakers' interests in accumulating power or resources or solving other problems. Otherwise, demands by moral advocates are tossed aside. And, as Hafner-Burton shows, even the inclusion of human rights protections in trade agreements is no guarantee of real change, because many of the governments that sign on to fair trade regulations oppose such protections and do not intend to force their implementation.

Ultimately, Hafner-Burton finds that, despite the difficulty of enforcing good regulations and the less-than-noble motives for including them, trade agreements that include human rights provisions have made a positive difference in the lives of some of the people they are intended-on paper, at least-to protect.

Forced to Be Good: Why Trade Agreements Boost Human Rights