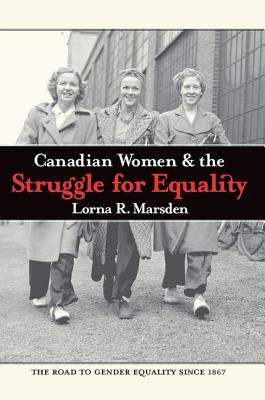 Canadian Women and the Struggle for Equality

What range of possibilities might appear on the horizon to a young woman today as she contemplates her future compared to those envisioned by a young woman 150 years ago? And how would her daily life be different? The degree of change in women's lives in Canada over the last 150 years is staggering, and much is the result of the fight for greater equality. How did this change take place?
Establishing equality as a fact of daily life has been a protracted struggle, and one that remains far from finished. Over the last century and a half since Confederation, this struggle has taken on a unique character in Canada, given our country's peculiar circumstances. Lorna R. Marsden, sociologist and activist-who has herself been involved in the action-chronicles the circumstances, the people, and the social changes that have characterized women's journey down the long road toward equality. Her account considers changes brought about by such forces as war, immigration, and public health, as well as other complex historical changes, such as legal evolution and employment opportunities.
This fascinating book is full of insight, little known facts (for example, many women could vote as early as 1791 in some parts of Canada), and an understanding of the complex ways that a society like Canada can and does change. It also reminds us that there is still a distance to go in the journey toward equality.

Title: Canadian Women and the Struggle for Equality

Canadian Women and the Struggle for Equality