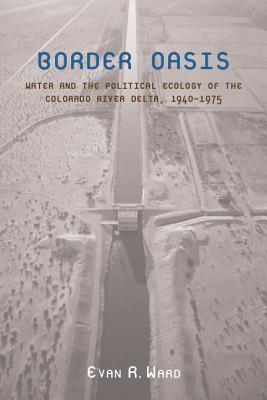 Border Oasis: Water and the Political Ecology of the Colorado River Delta, 1940ï¿½1975 (La Frontera: People and Their Environments in the US-Mexico Borderlands)

The environmental history of the Colorado River delta during the past century is one of the most important--and most neglected--stories of the U.S.-Mexico Borderlands. Thanks to entrepreneurs such as William E. Smythe, the surrounding desert in Arizona, California, Sonora, and Baja California has been transformed into an agricultural oasis, but not without significant ecological, political, economic, and social consequences.

Evan Ward explores the rapid development of this region, examining the ways in which regional politics and international relations created a garden in the Mexicali, Yuma, and Imperial Valleys while simultaneously threatening the life of the Colorado River. Tracing the transformation of the delta by irrigated agribusiness through the twentieth century, he draws on untapped archival resources from both sides of the border to offer a new look at one of the world's most contested landscapes.

Border Oasis tells how two very different nations developed the delta into an agricultural oasis at enormous environmental cost. Focusing on the years 1940 to 1975--including the disastrous salinity crisis of the 1960s and 1970s--it combines Mexican, Native American, and U.S. perspectives to demonstrate that the political and diplomatic influences on the delta played as much a part in the region's transformation as did irrigation. Ward reveals how mistrust among political and economic participants has been fueled by conflict between national and local officials on both sides of the border, by Mexican nationalism, and by a mutual recognition that water is the critical ingredient for regional economic development.

With overemphasis on development in both nations leading to an ecological breaking point, Ward demonstrates that conflicting interests have made sound binational management of the delta nearly impossible. By weaving together all of these threads that have produced the fabric of today's lower Colorado, his study shows that the environmental history of the delta must be understood as a whole, not from the standpoint of only one of many competing interests.

Title: Border Oasis: Water and the Political Ecology of the Colorado River Delta, 1940ï¿½1975 (La Frontera: People and Their Environments in the US-Mexico Borderlands)

Border Oasis: Water and the Political Ecology of the Colorado River Delta, 1940ï¿½1975 (La Frontera: People and Their Environments in the US-Mexico Borderlands)