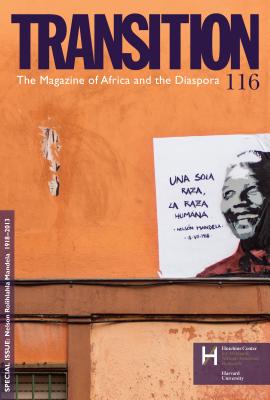 Nelson Rolihlahla Mandela 1918-2013: Transition: The Magazine of Africa and the Diaspora

December 2014 marked a year since the passing of Nelson Mandela--a man who was as much myth as flesh and blood. Transition pays tribute to Mandela's worldly attainments and to his otherworldly sainthood. Featuring remembrances from Wole Soyinka, Xolela Mangcu, Pierre de Vos, and Adam Habib, this issue assembles Mandela's staunchest allies--for whom he approached saintliness--as well as his most entrenched critics.Other contributors consider the iconicity of Mandela--including his representations in films; the importance of boxing to his political career; his time studying with the revolutionary army in Algeria; his stance on children's rights; and even his ill-fated trip to Miami. Whoever you think Mandela was--or wasn't--this issue is the new required reading.

Published three times per year by Indiana University Press for the Hutchins Center at Harvard University, Transition is a unique forum for the freshest, most compelling ideas from and about the black world. Since its founding in Uganda in 1961, the magazine has kept apace of the rapid transformation of the African Diaspora and has remained a leading forum of intellectual debate. Transition is edited by Alejandro de la Fuente.

Title: Nelson Rolihlahla Mandela 1918-2013: Transition: The Magazine of Africa and the Diaspora

Nelson Rolihlahla Mandela 1918-2013: Transition: The Magazine of Africa and the Diaspora