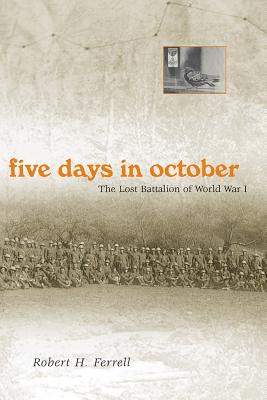 Five Days in October: The Lost Battalion of World War I

During American participation in World War I, many events caught the public's attention, but none so much as the plight of the Lost Battalion. Comprising some five hundred men of the Seventy-seventh Division, the so-called battalion was entrapped on the side of a ravine in the Argonne Forest by German forces from October 2 to 7, 1918. The men's courage under siege in the midst of rifle, machine-gun, mortar, and artillery fire (coming both day and night), with nothing to eat after the morning of the first day save grass and roots, and with water dangerous to obtain, has gone down in American history as comparable in heroism to the defense of the Alamo and the stand at the Little Big Horn of the troops of General George A. Custer.
Now, in Five Days in October, historian Robert H. Ferrell presents new material--previously unavailable--about what really happened during those days in the forest. Despite the description of them as a lost battalion, the men were neither lost nor a battalion. The name was coined by a New York newspaper editor who, upon learning that a sizable body of troops had been surrounded, thought up the notion of a Lost Battalion--it possessed a ring sure to catch the attention of readers.
The trapped men actually belonged to companies from two battalions of the Seventy-seventh, and their exact placement was well known, reported by runners at the outset of the action and by six carrier pigeons released by their commander, Major Charles W. Whittlesey, during the five days his men were there. The causes of the entrapment were several, including command failures and tactical errors. The men had been sent ahead of the main division line without attention to flanks, and because of that failure, they were surrounded. Thus began a siege that took the lives of many men, leading to the collapse of the colonel of the 308th Infantry Regiment and, many believe, to the suicide of Major Whittlesey three years later.
This book grew out of Ferrell's discovery of new material in the U.S. Army Military History Institute at the Army War College from the papers of General Hugh A. Drum and in the National Archives in College Park, Maryland. The Drum papers contain the court-martial record of the lieutenant of a machine-gun unit attached to the battalions, who advised Major Whittlesey to surrender, while the Seventy-seventh Division files contain full accounts of the taut relations between the Lost Battalion's brigade commander and the Seventy-seventh's division commander. By including this material, Ferrell gives a new accounting of this intriguing affair. Five Days in October will be welcomed by all those interested in a fuller understanding of the story of the Lost Battalion.

Title: Five Days in October: The Lost Battalion of World War I

Five Days in October: The Lost Battalion of World War I