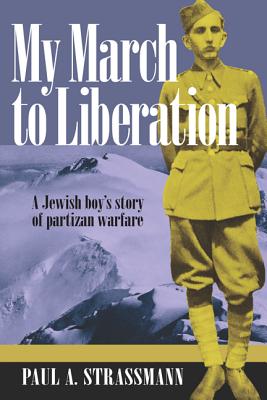 My March to Liberation: A Jewish Boy's Story of Partizan Warfare

By: Strassmann, Paul A.

My March to Liberation: A Jewish Boy's Story of Partizan Warfare is the compelling saga of a young Jewish boy coming of age during World War II. Paul Strassmann was fifteen when his family's life in Trenč n, Slovakia, was turned upside down by the war. His memoir tells one man's story of what it was like to be a teenager during World War II--what he learned, what he lost, and what he had to do to survive.

During the summer and fall of 1944, life became perilous. Strassman's family was deported, and he became a fugitive, but he quickly determined that he was unsuited for a life in hiding. He joined a partizan unit, and took part in military actions and survival efforts during the brutal winter months that followed.Strassmann's memoir reflects on the reasons he chose to take up combat as a means of escaping the Germans. Not only does he provide the reader with recollections of various partizan campaigns, but he also offers tender portrayals of those he loved and eventually lost. In addition, the memoir addresses how the Slovak government methodically organized the impoverishment and then the annihilation of Slovak Jews--actions that Strassmann describes as the "bureaucratization of genocide."

Title: My March to Liberation: A Jewish Boy's Story of Partizan Warfare

My March to Liberation: A Jewish Boy's Story of Partizan Warfare