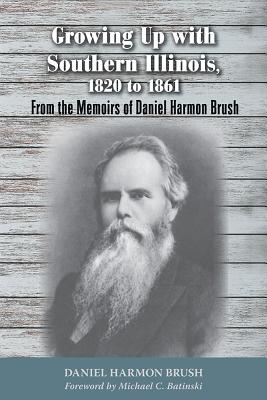 Growing Up with Southern Illinois, 1820 to 1861: From the Memoirs of Daniel Harmon Brush (Shawnee Classics)

Daniel Harmon Brush came to southern Illinois from Vermont with his parents in the 1820s and found a frontier region radically different from his native New England. In this memoir, Brush, the eventual founder of Carbondale, Illinois, describes his early life in the northeast, his pioneer family s move west, and their settlement near the Illinois River in Greene County, Illinois. Beginning as a store clerk, Brush worked hard and became very successful, serving in a number of public offices before founding the town of Carbondale in the 1850s, commanding a regiment in the Civil War, and practicing law, among other pursuits. Brush never let go of his pious New England roots, which often put him at odds with most other citizens in the region, many of whose families emigrated from the southern states and thus had different cultural and religious values. The memoir ends in 1861, as the Civil War starts, and Brush describes the growing unrest of Southern sympathizers in southern Illinois. Brush s story shows how an outsider achieved success through hard work and perseverance and provides a valuable look at life on the western frontier."

Title: Growing Up with Southern Illinois, 1820 to 1861: From the Memoirs of Daniel Harmon Brush (Shawnee Classics)

Growing Up with Southern Illinois, 1820 to 1861: From the Memoirs of Daniel Harmon Brush (Shawnee Classics)