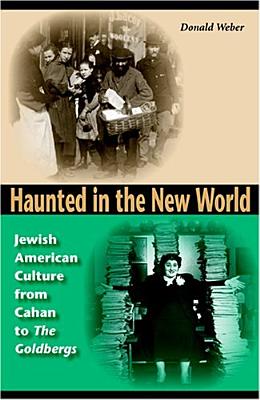 Haunted in the New World: Jewish American Culture from Cahan to The Goldbergs (Jewish Literature and Culture)

Haunted in the New World is a superb, insightful, and acutely intelligent piece of work. It makes a real contribution to the understanding of ethnicity in general and Jewish American culture in particular." --Morris Dickstein

In 1916 Abraham Cahan, editor of the Jewish daily The Forward, warned his Yiddish-speaking readers of the potential psychic dangers associated with their New World situation. "You will not be able to erase the old home from your heart," he cautioned his immigrant readers, transplanted from the shtetls and cities of Eastern Europe to exhilarating, if bewildering, multicultural New York. Building on Cahan's deeply personal reflection, Haunted in the New World maps the affective landscape of modern Jewish American culture.

Drawing on scholarship in a range of disciplines, including the sociology of manners, the study of the role of foodways in the formation of ethnic identity, the psychoanalysis of shame and self-hatred, and the role of memory for those unsettled by the experience of migration, Donald Weber traces the impact of the tension between nostalgia for the world left behind and the desire to blend into American culture, as evidenced in a number of key texts in the canon of Jewish American expression. These range from early immigrant fiction and cinema, through the novels of Anzia Yezierska and Henry Roth, to Hollywood's representation of Jews in The Jazz Singer and Gentleman's Agreement, to Saul Bellow, Gertrude Berg (Molly Goldberg), and the comedians Milton Berle and Mickey Katz. Setting an array of figures and works in creative dialogue, Haunted in the New World offers a genealogy of those core emotions--shame and self-hatred, nostalgic longing and the impulse to forget--that organized much of 20th-century Jewish American expressive culture and transformed American culture at the same time.

Title: Haunted in the New World: Jewish American Culture from Cahan to The Goldbergs (Jewish Literature and Culture)

Haunted in the New World: Jewish American Culture from Cahan to The Goldbergs (Jewish Literature and Culture)