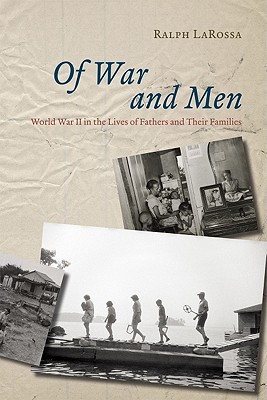 Of War and Men: World War II in the Lives of Fathers and Their Families

Fathers in the fifties tend to be portrayed as wise and genial pipe-smokers or distant, emotionless patriarchs. This common but limited stereotype obscures the remarkable diversity of their experiences and those of their children. To uncover the real story of fatherhood during this transformative era, Ralph LaRossa takes the long view from the attack on Pearl Harbor up to the election of John F. Kennedy revealing the myriad ways that World War II and its aftermath shaped men.
Offering compelling accounts of people both ordinary and extraordinary, "Of War and Men" digs deep into the terrain of fatherhood. LaRossa explores the nature and aftereffects of combat, the culture of fear during the Cold War, the ways that fear altered the lives of racial and sexual minorities, and how the civil rights movement affected families both black and white. Overturning some calcified myths, LaRossa also analyzes the impact of suburbanization on fathers and their kids, discovering that living in the suburbs often strengthened their bond. And finally, looking beyond the idealized dad enshrined in TV sitcoms, "Of War and Men" explores the brutal side of family life in the postwar years. LaRossa s richly researched book dismantles stereotypes while offering up a fascinating and incisive chronicle of fatherhood in all its complexity."

Title: Of War and Men: World War II in the Lives of Fathers and Their Families

Of War and Men: World War II in the Lives of Fathers and Their Families