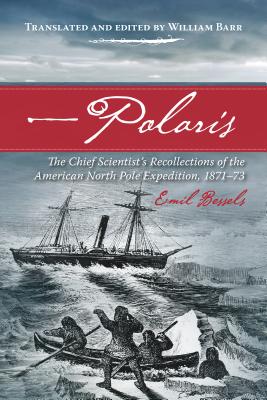 Emil Bessels was chief scientist and medical officer on George Francis Hall's ill-fated American North Pole Expedition of 1871-73 on board the ship Polaris. Bessels' book, translated from the German in its entirety for the first time, is one of only two first-hand accounts of the voyage, and it is the only first-hand account of the experiences of the group which stayed with the ship after it ran afoul of arctic ice, leaving some of its crew stranded on an ice floe. Bessels and the others spent a second winter on shore in Northwest Greenland, where the drifting, disabled ship ran aground. Hall died suspiciously during the first winter, and Bessels is widely suspected of having poisoned him. Bill Barr has uncovered new evidence of a possible motive. Polaris includes considerable detail which does not appear elsewhere. It is the only account of the expedition which includes rich scientific information about anthropology, geology, flora and fauna. It provides much more information than other accounts on the Greenland settlements Polaris visited on her way north. Bessels' is the only published first-hand account of the second wintering of part of the ship's complement on shore at Polaris House, near Littleton Island, and of that party's attempt at travelling south by boat until picked up by the Scottish whaler Ravenscraig. The same applies to the cruise aboard the whaler, Arctic, after Bessels and his companions transferred to that ship. Essential reading for researchers and students of arctic exploration history, this book is also a compelling read for the interested general reader.