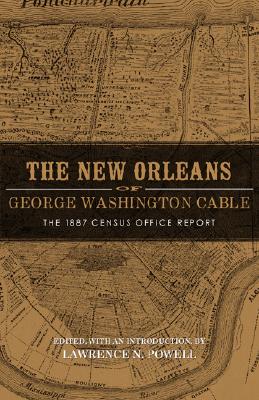 A pioneering local-color writer about Creole New Orleans and a public advocate for black equality in his native South during and after Reconstruction, George Washington Cable (1844--1925) depicted in his writing the clash between American newcomers and a quaint but proud French-speaking population in post--Louisiana Purchase New Orleans. His work, including the short-story collection Old Creole Days (1879) and his most famous novel, The Grandissimes (1880), received widespread critical acclaim and was serialized in the country's best highbrow magazines. In 1880, Cable was commissioned to write a "historical sketch" of pre--Civil War New Orleans for a special section of the Tenth U. S. Census. Although subsequently revised and published as Creoles of Louisiana, Cable's original piece never appeared in print again except as a facsimile reprint. With The New Orleans of George Washington Cable, Lawrence N. Powell presents this rare text in its entirety for the first time, including Cable's copious footnotes and other material deleted from the original census publication by its editors.
Likened by northern critics to Nathaniel Hawthorne and Bret Harte, Cable was already a literary sensation by the time he undertook the census project. He approached writing history as seriously as he did writing fiction, and he attacked his new challenge with vigor. Instead of the "sketch" he was asked to provide, Cable turned in 313 pages of meticulously documented history -- complete with 647 footnotes -- on everything from the origins of the city and its role in the Indian wars to the effect of West Indian immigration, the War of 1812, and commercial expansion through the mid-nineteenth century. He used sources in English, French, and Spanish, drawing on published histories, early maps, official surveys, travel accounts, medical journals, sanitation reports, city ordinances, American State Papers, city directories, and the New Orleans--based DeBow's Review -- a treasure trove of history, journalism, and useful statistics -- for his lively account of the Crescent City.
In an invaluable introduction to Cable's text, Powell illuminates the circumstances surrounding Cable's turn to historical writing and sheds new light on his controversial relations with white Creoles. Cable's forays into Creole culture aroused considerable hostility, as Powell ably demonstrates in his analysis of Cable's rivalry with Creole historian Charles Gayarr . Although Cable's vocal support for full civil rights for African Americans eventually forced him to leave New Orleans for Massachusetts, he continued to write novels, stories, and nonfiction about the Crescent City and the South. As Powell shows in his introduction, Cable's vast historical research fundamentally influenced both his development as a writer and his evolution as a political reformer.