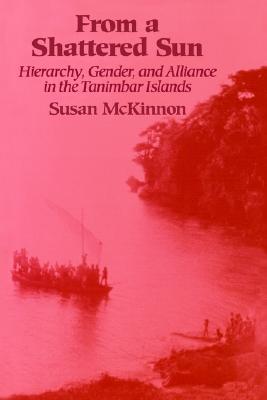 From a Shattered Sun: Hierarchy, Gender, and Alliance in the Tanimbar Islands

Among a growing number of ethnographies of eastern Indonesia that deal with cosmology, exchange, and kinship, From a Shattered Sun is the first to address squarely issues originally broached by Edmund Leach and Claude L vi-Strauss concerning the relation between hierarchy and equality in asymmetric systems of marriage.
On the basis of extensive fieldwork in the Tamimbar islands, Susan McKinnon analyzes the simultaneous presence of both closed, asymmetric cycles and open, asymmetric pathways of alliance-of both egalitarian and hierarchical configurations. In addition, Tamimbarese society is marked by the existence of multiple, differentially valued forms of marriage, affiliation, and residence. Rather than seeing these various forms as analytically separable types, McKinnon demonstrates that it is only by viewing them as integrally related-in terms of culturally specific understandings of "houses," gender, and exchange-that one can perceive the processes through which hierarchy and equality are created.

Title: From a Shattered Sun: Hierarchy, Gender, and Alliance in the Tanimbar Islands

From a Shattered Sun: Hierarchy, Gender, and Alliance in the Tanimbar Islands