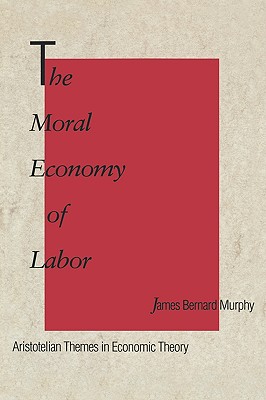 The Moral Economy of Labor: Aristotelian Themes in Economic Theory

This book concerns the dignity and the degradation of labor. Because our work has considerable power either to foster or to undermine our happiness and well-being, the degradation of labor is a profound obstacle to human flourishing. Yet the moral dimension of labor has been neglected in our political theory and practice. In this book, James Bernard Murphy aims to restore productive labor to its rightful place in moral and political debate.

Ever since Aristotle, there have been many theories of distributive justice but very little in the way of a theory of justice in production. Through a bold reconstruction and critique of Aristotle's views of nature and moral reason, Murphy develops a new Aristotelian theory of productive labor. According to Aristotle, work has dignity when the worker executes what he has first conceived in thought, and work is degraded when one worker merely executes what is conceived by another. With Aristotle's definition of work as a unity of conception and execution, we can see what is wrong with work in the contemporary world: the detailed division of labor has divorced conception from execution. Although the prevalence of monotonous and stultifying work is widely regarded as the inevitable cost of economic progress, Murphy argues that restoring the unity of conception and execution in the design of jobs is compatible with our economic interests in efficient production and is required by our moral interests in human flourishing.

The Moral Economy of Labor: Aristotelian Themes in Economic Theory